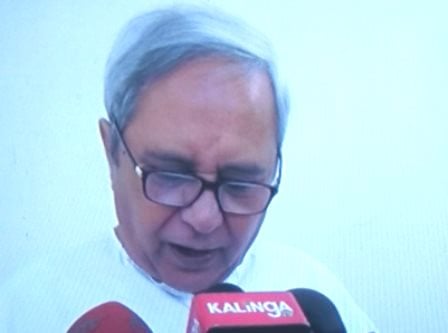 New Delhi: Odisha Chief Minister Naveen Patnaik reiterated his demand for the formation of Tribunal to resolve the ongoing Mahanadi river water dispute between Odisha and Chhattisgarh while attending the 12th Standing Committee meeting of the Inter-State Council here today.

Patnaik, who had written letter to Prime Minister Narendra Modi over the matter twice in ten days (November 7 and 17), raised the demand during the meeting which was chaired by Union Home Minister Rajnath Singh at Vigyan Bhawan.

“I urged in the meeting to take urgent action to stop the unilateral construction activities in Chhattisgarh in Mahanadi basin and constitute a Tribunal without further delay to address the problem,” Patnaik said after attending the meeting.

The Odisha Chief Minister had also raised the tribunal issue in the previous Inter-State meeting held on April 19 and had demanded to constitute the tribunal by November 19.

The other issues which Naveen raised in the meeting included the acceptance of the recommendation of the Punchhi Commission early after factoring in responses of the State to strengthen the federal fabric.

He requested to discontinue the Polavaram Project in Andhra Pradesh saying it will impact a large number of people in hinterland tribal district of Malkangiri adversely.

Increasing the Minimum Support Price (MSP) for common paddy from Rs.1470 per quintal to Rs.2930 per quintal was made as non-remunerative MSP acts as a deterrent in doubling farmers’ income.

Had also demanded two additional Battalions of Central Forces in the state to address asymmertric deployment along the border vis-à-vis Chhattisgarh.

The other demand which Naveen placed in the meeting are to revise royalty on coal which was due for revision in April, 2015 and earmark 60 per cent of the clean environment cess for the coal bearing states and approve the same sharing pattern in Centrally Sponsored Scheme in Odisha at par with North Eastern Himalayan states.

In a bid to realise the goal of digital payment in Odisha, Patnaik also requested to strengthen tele-density in Odisha and cover the unbanked Gram Panchyats with bank branches on Mission Mode.

Representatives of 30 Union Ministries/Departments and 7 State Governments were also present to assist the Committee in its deliberations.