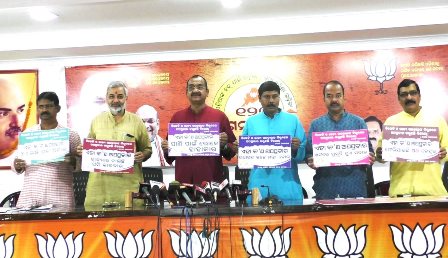 Bhubaneswar: As per its earlier announcement, the Odisha unit of BJP will begin its week-long ‘Hak Ra Ladhei Jatra’ (Fight for Right March) from tomorrow across the state.

Placards, posters and audio to be used during the ‘Hak Ra Ladhei Jatra’ were launched at the party’ state headquarters today. Odisha BJP Vice-President Samir Mohanty, Spokesperson Sajjan Sharma, Secretary Kalindi Samal and other senior leaders were present during the launching ceremony.

The decision to hold the seven-day demonstration against the alleged corruption of the state government was taken during the state executive meet on October 3.