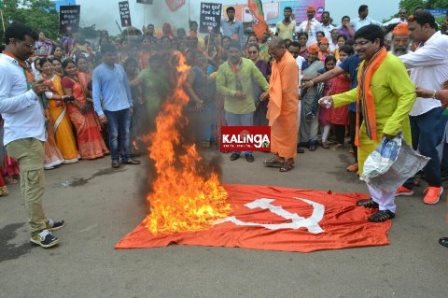 Bhubaneswar: Odisha BJP on Wednesday staged a demonstration at Master Canteen Square here against the killing of BJP and RSS workers in Kerala.

Hundreds of saffron party workers and RSS activists held a protest rally under the leadership of senior BJP leader Pratap Sarangi. They alleged that the CPM activists are perpetrating communal violence in the country.

They also stomped over and torched flags of CPM party on the road.

BJP has set off on a 15-day foot march under the leadership of its chief Amit Shah to protest the CPI-M’s alleged violence against its party workers.