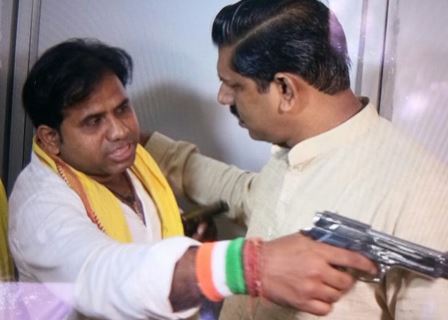 The youths, claiming themselves as saffron party workers of Barang block of Cuttack district, threatened  Panda at gun point with some applications and prescription in their hands.

“I had received a phone call from someone asking for some financial help some days ago. But, I did not take it seriously. Two persons had met me yesterday. They sought help for the treatment of their ailing father. But today, two persons came to my office. They showed me some applications along with some prescriptions, and demanded me to ask money from the CM and PM’s relief fund at gun point. However, I am not sure whether they belong to BJP or were sent by some influential persons,” reacted Basant Panda.

Other BJP workers and leaders overpowered them and handed them over to Commissionerate Police. Interrogation of the youths is underway.

Meanwhile the youths have been identified as Pinaki Mohanty and Sambit Panda.