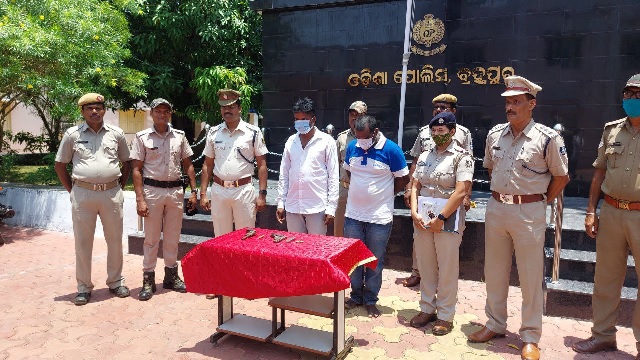 Berhampur: As many as two habitual offenders were arrested by Gopalpur Police in Ganjam district of Odisha on Tuesday when the two were reportedly planning a crime. Police have seized two country made guns, six live bullets and a bike from their possession.

The accused persons have been identified as Kanhei Sethy and Ganesh Reddy of the Khandia Sahi in Ambapua village on the outskirts of Berhampur.

As per reports, Gopalpur Police got information from a solid source on Tuesday that two habitual offenders were planning for murder of their enemy by hurling bomb and using guns near the Income Tax office of Ambapua village in the district.

Acting on this a Police team, under the leadership of Berhampur Sadar SDPO Shiba Shankar Mohaptra and comprising of Gopalpur Police Station IIC and other cops, conducted raids at multiple places and finally arrested the two culprits.

While further investigation of the case is underway Police are probing to know from where the accused persons got the weapon and the live ammunition. Ganjam SP informed about this in a presser today.