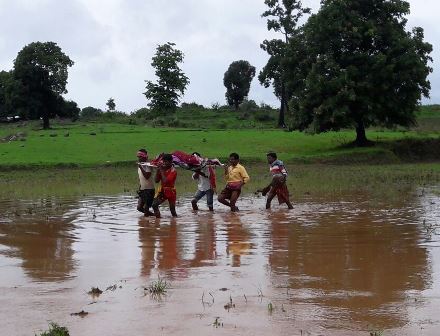 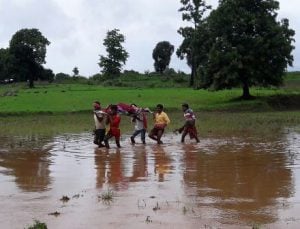 Nabarangpur: In a heartrending incident, a woman in Nabarangpur district died after the ambulance failed to reach her village because it has no  motorable road.

Nile Majhi, wife of Jagamohan Majhi of Khaliapani village in Jharigaon block, was undergoing treatment at a local dispensary when her mother took her back to home on July 3. Late on Sunday night, Nile started experiencing labour pain and an ambulance was called to take her to the hospital. The ambulance reached Kebidi village at 4 AM, but couldn’t proceed further in the absence of road connectivity to Khaliapani. Kebidi and Khalkiapani villages are separated by a canal and the only way to commute is by crossing the canal. Though the villagers had made a makeshift bridge using pipes, it was washed away due to incessant rains recently. With no means to reach Khaliapani, the ambulance had to return. The villagers then arranged for a tractor to take Nile to the hospital.

It took around 3 hours for Nile and her family to reach the hospital, around 15 kms away, due to the uneven roads. Barely 15 minutes after she reached hospital, Nile breathed her last. What was worse is though the hospital authorities arranged for an ambulance to carry the dead body, it once again stopped at Kebidi village and the body had to be carried on shoulders for 3 kms.

Though the villagers have pressed for the construction of a bridge several times, no action has been taken by the district administration so far.