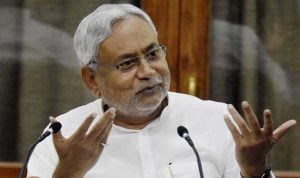 Patna: In a major political development in Bihar, Nitish Kumar tendered his resignation as the Chief Minister of the state after meeting Governor Keshari Nath Tripathi this evening. He took the decision after a JD(U) legislators’ meeting at his official residence in Patna.

The move ends the two-year-long political experiment that was branded as a game-changing ‘Mahagathbandhan’ or Grand Alliance of three parties: JD(U), RJD and the Congress.

Addressing mediapersons outside the  Raj Bhavan in Patna,  Nitish Kumar said, “In the political circumstances obtaining in Bihar, it became difficult to run the grand alliance government.”

The Governor has accepted his resignation. The BJP, which is seen behind the entire political development, has convened its Parliamentary Board meeting to discuss the situation.

JD (U) sources said, Kumar took the drastic decision due to the ongoing political crisis that arose after the CBI lodged an FIR against Deputy Chief Minister Tejaswi Prasad Yadav in the land-for-hotels case.

Meanwhile, Nitish Kumar’s resignation throws Bihar into chaos with no party having a majority in the 243-member Assembly.