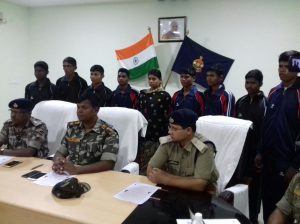 Chhattisgarh:  Nine Maoists, including one from the Dandakaranya Special zone (DKSZ) member Ganesh Ueke’s gunner and two from the South Bastar Battalion, surrendered before the police on Sunday.

The Maoists surrendered before the Bastar Police Range andofficers of the Central Reserve Police Force (CRPF).

Six among the nine Maoists who surrendered today carried a bounty of Rs. 26 lakh on their head.

The Police Superintendent will give an amount of Rs. 10,000 to each surrendered Maoist in appreciation of their move.