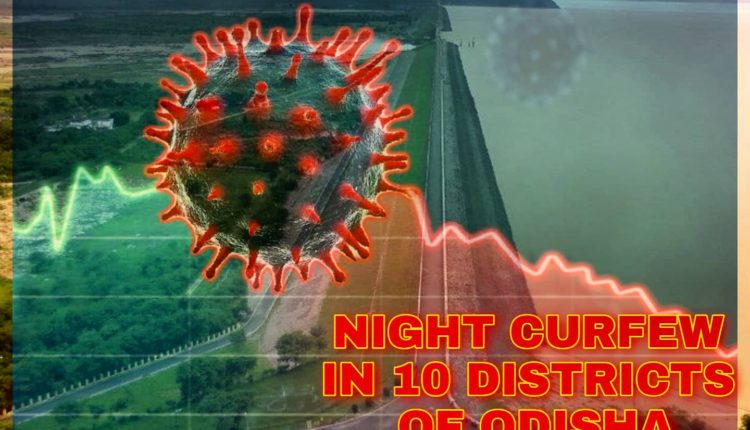 Bhubaneswar: Night curfew shall be imposed in 10 districts of Odisha from April 5 (05.04.2021) till further orders said the SRC, Odisha by way of a circular issued on Saturday.

The night curfew shall applicable from 10 pm to 5 am.

Night Curfew In Odisha, Strict Checking And Action Against…

Night Curfew Likely To Return In December As Per New MHA…

This restriction shall not apply to:

. Staff of IT & ITeS Companies on production of their ID cards
. Any person, in case of medical or other emergency
. Ownerl staff of Chemist shops
. All industrial units
. All construction activities
. Movement of Public Transport, private vehicles and taxis (including cabs by aggregators like Ola, Uber, etc.) to and from airports, railway station and bus
terminals/ stands/ stops, for facilitating movement of passengers by air, rail and road.
. Operation of hotels and hospitality units, including their associated offices, movement of staff and associated personnel
. Dhabas along National and State Highways/ Major roads for takeaway only
. Petrol pumps and CNG Stations
. Print and Electronic Media identifled by Commissionerate/ District Police (with identity cards of respective media houses)
. LPG distribution, home delivery of cooking gas and associated facilities, personnel and vehicular movement
. Home Delivery of food, groceries, vegetables, egg, fish, meat and other essential items by restaurants and aggregators such as Zomato, Swiggy, OPOLFED, OMFED, Chilika Fresh etc.

Covid Vaccine In 3rd Trimester Can Transfer Antibodies To Baby