NGT stays work on 6 projects of Chhattisgarh Govt on Mahanadi 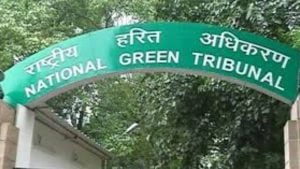 New Delhi: Amid the ongoing row between Odisha and Chhattisgarh over sharing of Mahanadi river water, the National Green Tribunal (NGT) on Wednesday asked the latter to stop construction work on six projects it is building on the river till the next hearing.

The tribunal categorically stated that the Government of Chhattisgarh cannot undertake constructio work on six grade ‘A’ projects on Mahanadi river without its permission.

Out of the 57 projects, work is in progress on 51 while construction of six others is yet to begin. The Tribunal’s order is pertinent to these six projects.

An NGO—“Agami Orissa”, led by Sudarsan Das and Basudev Bhatta , had moved the NGT last October seeking its directions to immediately stop all construction activities by the Chhatisgarh Government on the Mahanadi river.

In their plea, Das and Bhatta had alleged that the Chhattisgarh government was illegally constructing numerous barrages in the upper catchment area of Mahanadi River leading to dwindling water flow downstream affecting the farmers and environment in Odisha.

The next hearing of the Tribunal has been scheduled on August 25.