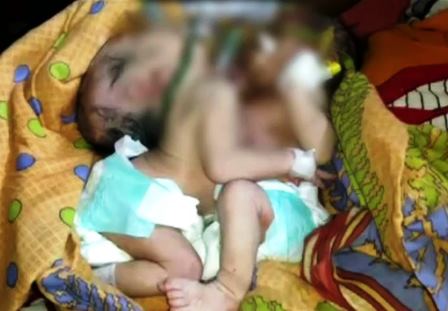 According to Sishu Bhawan officials, Ganga-Jamuna have been shifted to the Intensive Care Unit (ICU) after a CT scan, ultra sound and other preliminary tests were conducted on them.

The newborn baby girls joined at chest and abdomen have been kept under observation as their condition is not stable.

Kishore Kumar Dutta’s wife Sumitra Dutta gave birth to the conjoined twins in a private hospital in Nayagarh on Friday. Later, Kishore, a native of Pancharidamanapur village under Sarankul police limits, shifted them to the District Headquarters Hospital and where they were kept in the ICU. However, the doctors referred them to Sishu Bhawan as their health condition was not good.

Odisha Health Minister Pratap Jena, following media reports reviewed the health condition of the babies at Sishu Bhawan yesterday and announced that the state government will bear all the medical expenses of the conjoined twins and make provisions for their treatment outside the state, if required.

Meanwhile, a 12-meber doctor team is treating the second conjoined twins of the state after Kandhamal’s Jaga-Balia.