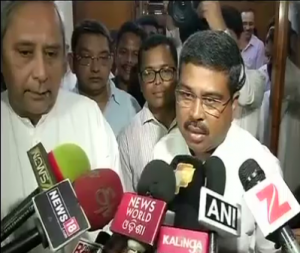 Bhubaneswar: The meeting between Chief Minister Naveen Patnaik and Union Petroleum Minister Dharmendra Pradhan over Paradip IOCL refinery issue at Odisha Bhawan in New Delhi today concluded on a positive note with both the leaders showing optimism about an amicable solution to the impasse.

Talking to media persons soon after the meetin,g Naveen said, “We had a discussion on the IOCL problem and hope we would come to an amicable solution.” “We are very much hopeful of a positive result,” he added.

However, Dharmendra cited an example from his speech on the occasion of Utkal Divas this year in which he had pitched for an amendment to the existing MoU between IOCL and the Odisha Government signed in 2004. He insisted both sides should accommodate each other’s concerns to sort out their differences.

Today’s meeting was held in pursuance of a court order on March 24 this year in which the Orissa High Court had directed the working group comprising the authorities of IOCL, the Union Ministry of Petroleum and Natural Gas (PNG) and Odisha Government officials to resolve the issue within two months.

Notably, around six rounds of meetings held between the Odisha Government and the IOCL authorities over the issue have failed to resolve the dispute. .