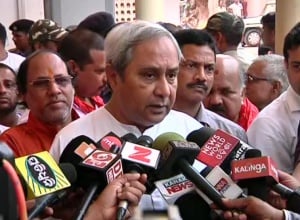 Puri: Chief Minister Naveen Patnaik on Saturday condemned the series of incidents of egg-hurling on visiting Union Ministers as well as the Ministers of Odisha government in various part of the state in the recent past.

While responding to media queries on the rising egg-hurling attacks to both Union and State Ministers in Odisha, Patnaik said, “There is no place for such activities in a democracy.”