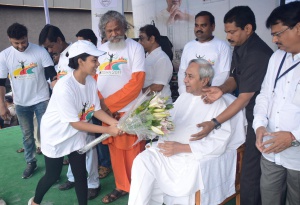 Bhubaneswar: Braving persistent rain on Sunday morning, Chief Minister Naveen Patnaik attended the 31st edition of the Patha Utsav here at Janpath in the capital city, and urged people to support the upcoming 22nd Asian Athletics Championship (AAC), to be hosted by Bhubaneswar from July 6 to July 9.

Addressing the huge crowd at Janpath, the Chief Minister wished the people of Odisha on the occasion of Ratha Jatra. He asked the people to come out in large number and enjoy the forthcoming AAC 2017, and extend their support to make it a successful event.

“Promoting the forthcoming AAC” was the central theme of today’s Patha Utsav, while mascot “Olly” was the major attraction at the extravaganza weekly festival of the temple city.

A series of programmes such as ’selfie with Olly zones’, distribution Olly masks, were conducted at this edition of Patha Utsav. In addition, athletic quiz, thematic drawing and painting competitions on athletics etc. were also held on the occasion.

Flags of all 45 participating countries were displayed at various locations at Rajpath.

Students of various schools and Colleges in the city including KISS were specially invited to this edition of Patha Utsav.