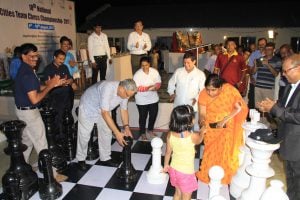 Organnized jointly by KIIT University and Jagatsinghpur District Chess Association, it is the first national level chess event in the country being held in a rural area.

As many as 30 city teams from Odisha, Haryana, West Bengal, Punjab, Tamil Nadu and Telengana are participating in the tournament. More than 150 chess players, including chess stars of Odisha Swayanshu Mishra, Aparajita Gochhikar, Saina Salonika and Kiran Manisha Mohanty, will take part in the tournament that will be played in 7 rounds. The final round and closing ceremony will be held on Wednesday.

The four best teams in the tournament will play in the Asian Cities Chess Championship to be held at KIIT campus from 26th August to 1st September, 2017. Odisha has the highest number of 16 teams participating in the first of its kind tournament while there are four teams each from West Bengal and Bihar and one each from Punjab, Haryana, Tamil Nadu, Telengana and Assam.

The holding of such a prestigious national level chess tournament held in a village for the first time is a matter of pride for Jagatsinghpur district and Odisha, opined the guests.