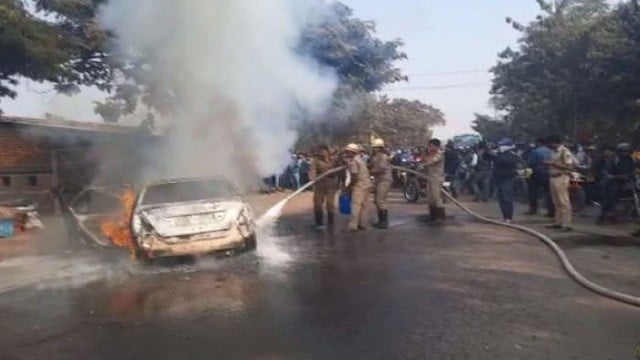 Rourkela: Three passengers along with a driver narrowly escaped death as car caught fire on NH-143 near Rourkela of Odisha.

According to reports, three members of a family along with a driver were travelling on a car (reg no: OR-14P-3131) from Sambalpur to Rourkela when the accident took place. The car was near Brahmani river bridge when the driver suddenly witnessed fire on the car. Within seconds the car was engulfed in flames and was surrounded with smoke.

However, the passengers and the driver timely escaped the car. The locals reached the accident site and informed the police and fire department who immediately rushed to the spot. The fire fighters doused the fire while the police initiated an investigating in the accident.

As the accident occurred on the National Highway, a traffic jam was witnessed during and after the accident.