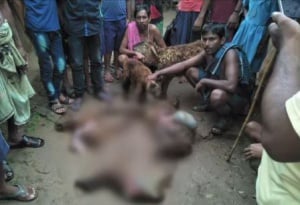 Cuttack: The number of sheep killed by a mysterious animal in Niali area of Cuttack district continues to mount with three more killing of the domestic animals reported at Uparaba Sahi on Monday.

Locals alleged that three sheep were found dead this morning. While the livers of the animals were missing, their abdomens were found torn apart. Two sheep were also found injured. A carcass of a dog was also found in a similar condition near the spot.

The villagers claimed that the circumstances of the death of the animals were similar to that of the sheep killed earlier.

The mysterious animal has also attacked an elderly woman of the village. The victim alleged that someone bit her leg while she was sleeping at around 10 PM yesterday.

Following repeated allegations by the locals, a six-member team of the forest department is keeping a close vigil on the animal for the last several days, but is yet to trace it.

Meanwhile, Animal Resources Minister Dr Damadar Rout confirmed the mysterious killing of the sheep, but dismissed reports that the livers of the killed sheep were found missing. He said that the domestic animals might have been killed by a hyena.

The Minister ordered an investigation and sought a report from the Chief District Veterinary Officer (CDVO).

Cuttack Collector Nirmal Chandra Mishra also joined Rout and urged the people not to believe the rumours floating in the area or get frightened.

Mishra informed that special teams had been formed to trace and catch the mysterious animal.  The local Tehsildar, forest officials, police personnel and some locals are in the team.

This apart, CCTVs will also be installed at different locations in the area to trace the animal.

A team of the Animal Disease Research Institute (ADRI) will also go to the village and conduct an on spot investigation.

More than 150 sheep have reportedly been found dead in Niali area in the last two months.