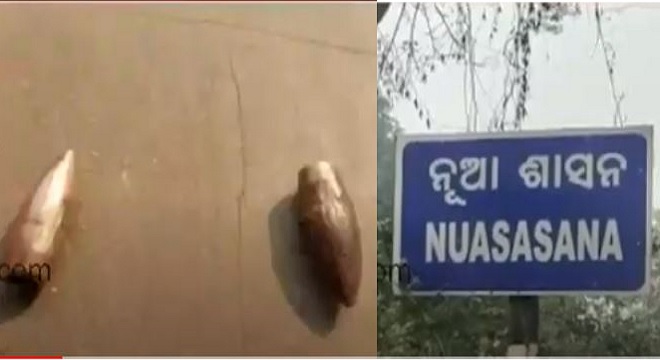 Cuttack: In a mysterious incident bullets (of gun) are showering from the sky in a village of Cuttack district in Odisha. This mysterious bullet shower has been experienced in the Nuasasan village under Khuntuni Police Station in Athagarh area for the last four years. However, the exact reason of the bullet shower is yet to be ascertained.

As per reports, the villagers of Nuasasan are scared off bullet falling here and there in the village. The process is going on since last four years. Cuttack Collector Bhabani Shankar Chayani has said that the matter has been brought to the notice of the Cuttack Rural SP to ascertain the reason behind such an unusual happening that is going on since years.

It is to be noted that there is no human habitats within 100 guz of the Naraj firing range. There is a hill near the firing range. It is not possible that bullets fired from this range would travel such a large distance to reach the village. The Additional DCP has said that a bullet can go a maximum up to 1000 yards.

On the other hand the villagers are scared since this unusual happening is going on for years. They have said that the bullet showering goes on in a month for about 7 to 8 days. It is yet to be ascertained from where the bullets are coming.

The asbestos of many houses in the village have got damaged as holes have been made due to the falling bullets. Even some villagers have sustained minor injuries due to the bullet shower.