A mysterious animal caught by locals in Niali area 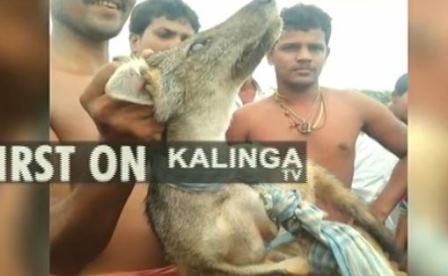 Cuttack: In a big development in connection with the killing of sheep in Niali area, locals caught a mysterious animal on Sunday morning.

The villagers caught the mysterious animal from Sasanapada Kharibila under Niali GP, which is suspected to be behind the killing of sheep in the area. However, the animal is yet to be identified by forest officials.

Locals claimed that they noticed such animal for the first time in the area and suspect it to be the real killer of domestic animals.

Soon after catching the wild animal, which looks like a dog, the villagers informed the special team from the Similipal National Park which has been in the region for last several days to identify the killers of the sheep.

The special team has sent the visuals of the caught animal to the Wildlife Institute of India (WII) to identify the animal and to ascertain the truth.

Meanwhile, the locals who caught the animal claimed that two to three such animals escaped from the spot and urged the forest officials to catch them.