Mumbai: A Mumbai cop was seen recently playing flute to the famous tune ‘Sandese Aate hain’ from film ‘Boarder’. The video has gone viral on the internet while netizens have widely applauded the performance.

In a recent video uploaded to twitter by the user Wadala Matunga Sion Forum we can see a cop sitting on a chair at the middle of an empty road and playing flute. His rendition is truly mesmerizing.

The video has garnered 252 re-tweets, 40 quote tweets and 1524 likes so far after it was uploaded to Twitter on May 8, 2022. And users have come up with encouraging comments praising the cop and the performance. 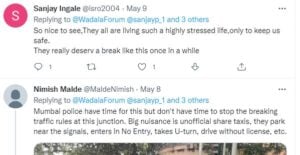 Heartless cop kicks elderly man, dangles him upside down at… 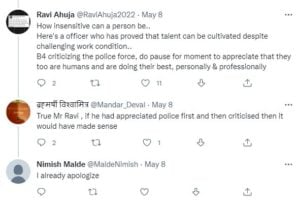 A user commented, “So nice to see, They all are living such a highly stressed life,only to keep us safe. They really deserv a break like this once in a while.”

Another user first vented his anger saying that Police should do its duty first rather than getting involved in other things. He wrote, “Mumbai police have time for this but don’t have time to stop the breaking traffic rules at this junction. Big nuisance is unofficial share taxis, they park near the signals, enters in No Entry, takes U-turn, drive without license, etc.” He also posted a video along with his comment.

However, this criticism did not go well with other netizens. Another user replied, “How insensitive can a person be.. Here’s a officer who has proved that talent can be cultivated despite challenging work condition.. B4 criticizing the police force, do pause for moment to appreciate that they too are humans and are doing their best, personally & professionally.” While another user also supported the reply, the first user who had criticised, wrote, “I already apologize.”

Another good thing about the clip is – the popular track ‘Sandese Aate Hain’ from film ‘Boarder’ is a cult song that is loved by huge number of people. Especially the film dwelt upon patriotism and this song as filmed in the movie is a great work. Most importantly, this song is all about security forces who dedicate their lives to keep the citizens of the country safe and secured. Hence, when this song is seen played by a cop, it gives some nostalgic feel.

Also read: Watch: Bunch of King Cobras get tangled up on a thin tree branch while fighting