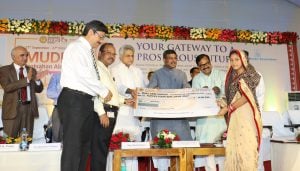 Bhubaneswar: Union Minister of Skill Development and Entrepreneurship Dharmendra Pradhan on Saturday urged banks to scale up disbursement of loans under MUDRA scheme to small entrepreneurs of Odisha, while attending the “MUDRA Protsahan Abhiyan” ( MUDRA Promotion Campaign) here on Saturday.

The Minister also hailed all the banks as small loans of up to Rs 18, 600 crore is being disbursed under MUDRA scheme in the state. Over 66 lakh small entrepreneurs across the state were benefited, he added.

The Minister stated that the move will free small entrepreneurs from burden of extremely high interest rates charged on them by other financial institutions.

“Extremely pleased to be a part of the #Mudra Protsahan Abhiyan, a promotion campaign to connect #PMMY to its beneficiaries at Bhubaneswar”, Pradhan tweeted.

Extremely pleased to be a part of the #Mudra Protsahan Abhiyan, a promotion campaign to connect #PMMY to its beneficiaries at Bhubaneswar. pic.twitter.com/lAu4hI7I3z

The Union Minister also handed over allotment letters from Banks to beneficiaries of the PMMY on the occasion. Odisha Finance Minister Sashibhusan Behera and Puri MP Pinaki Mishra were also present at the event.

The campaign is being organised across the country to make every Indian prosperous and empowered.