MSP for Paddy: BJD to stage Dharana near Raj Bhavan on Nov 27 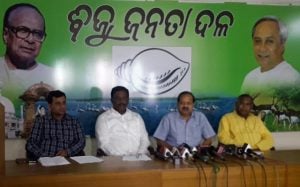 Bhubaneswar: The BJD Krushak Cell, the farmers’ wing of ruling Biju Janata Dal in Odisha, will stage demonstration in front of Raj Bhavan here on November 27 to press their demand for hike of Minimum Support Price (MSP) for paddy crops.

Addressing a press conference at the party office here on Friday, BJD Vice President and former Minister Debiprasad Mishra said, “The BJD Krushak Cell will stage demonstration in front of Raj Bhavan in the State capital to press its demand to hike the MSP for paddy to Rs 2,930 per quintal from existing Rs 1,550.”

“If the Union Government does not pay a heed to our demands, we will intensify our protest in the coming days and stage demonstrations at all the district headquarters in the state,” he warned.

In June this year, Modi government had raised the meagre 80 rupees per quintal MSP for paddy despite its poll promise to double the amount of MSP for paddy crops.