Most wanted criminal nabbed after police encounter in Ganjam 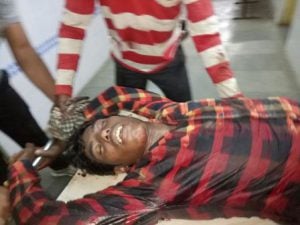 Berhampur: In a major success for the police drive against history-sheeters in Ganjam district, Bhanjanagar Police arrested Babu Nayak after an encounter at Garudapathar area in the afternoon on Thursday. Babu was on police’s radar since the Manachoura Utkal Gramya Bank loot case.

Reports say Bhanjanagar Police, which got a tip-off on the whereabouts of Babu today afternoon, raided the criminal’s hideout in Garudapathar. Bhanjanagar police teamed up with Tarasingh Police later in the day and an encounter ensued between the two sides. Babu was captured by the cops following two bullet injuries in his hand and leg inflicted on him during the encounter. Police also recovered 1kg gold, bombs and a bike from the possession of the criminal.

Babu has a number of cases, including robbery, pending against him at various police Stations in the district, informed police.