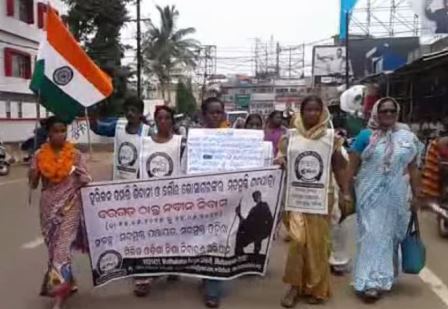 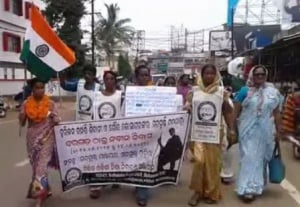 Dhenkanal: The couple, who began their walk from Gandhi Chowk in Bargarh to Naveen Nivas in Bhubaneswar (about 400kms) to press its demand for a ban on liquor in Khuntpali Gram Panchayat, got the support of the Milita Odisha Nisa Nibarana Abhiyan (MONNA) here on Thursday.

Goura Chandra Bhosagar and his wife Sibani, the former Naib Sarpanch of the Panchayat, who began their journey on foot to meet Chief Minister Naveen Patnaik along with their two-year-old daughter Lejinarani, were supported and accompanied by many MONNA activists in the district.

“A brother and his wife from Bargarh district have begun a journey for a noble cause. We met them today and will accompany them till Naveen Nivas in Bhubaneswar to make their journey successful,” said Urbashree Nayak, Secretary of the Dhenkanal unit of MONNA.

Sibani and her husband, a daily wage labourer, had also submitted a memorandum to the District Collector in this regard, but no action was taken on it. Instead, a raid was conducted on their house.

Protesting police inaction and demanding a ban on liquor in their locality, the couple began their journey on June 15 to place their demand before the Chief Minister. They are expected to reach Bhubaneswar within 10 days.