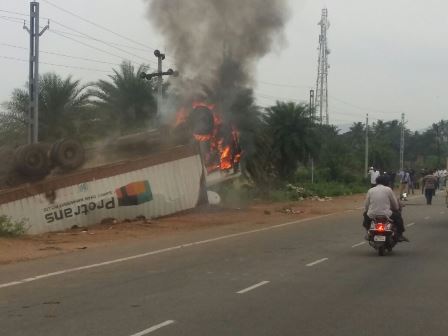 Berhampur: In a suspected case of cow vigilantism in Ganjam, a group of locals from Randha area under Golanthara police limits in the district set a truck ablaze suspecting that it was transporting beef after it overturned on Sunday morning. Fire tenders doused the flames that had engulfed the vehicle after a Herculean effort.

The incident occurred early this morning when an Andhra Pradesh bound truck from West Bengal overturned on NH-16 near Randha area in the district for reason that is yet to be ascertained. But much to the dismay of the driver and helpers of the vehicle, some locals soon started complaining that it was carrying beef and a good amount of it got spilled on the road after the incident. Before anybody could conduct a check to find out if it was really carrying beef, the angry mob torched the vehicle.

Golanthara Police reached the spot in the afternoon after getting a tip-off on the incident and called up the fire brigade to douse the fire. Fire tenders took hours to bring the flames under control.

Police has seized the vehicle and started investigation into the issue.