Berhampur: Armed miscreants allegedly injured three officials of a gold finance company under B.N Pur police limits today after they failed to loot cash and valuables. Police have started an investigation to identify the masked miscreants.

Employees of the gold finance company said that around five masked miscreants entered the office and threatened them on gunpoint. “They demanded the keys of the locker and when we denied they started assaulting us. They later confined us inside the bathroom,” said Mihir Pradhan, an employee. The incident took place at around 11 am. 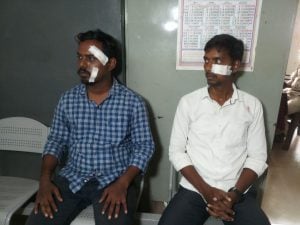 Police said that the miscreants speaking Hindi failed to take away any valuables from the locker as an OTP is required to open the locker. However, the miscreants decamped with three mobile phones of the employees.

Later the employees informed the matter to the police which rushed to the spot and rescued the victims. Police said that they are going through the CCTV footage to identify the miscreants involved in the incident.