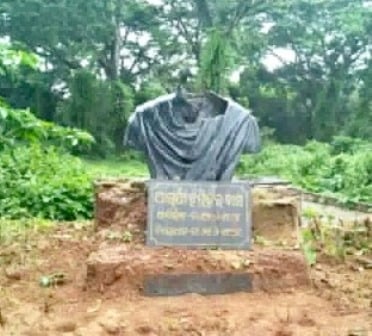 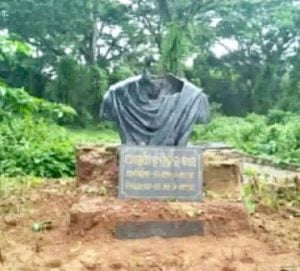 Puri: In an incident that has raised a big question mark on the safety and security of Satyabadi Bana Vidyalaya, established by Utkalamani Pandit Gopabandhu  Das, unknown miscreants beheaded Acharya Harihar Das’ statue located in its premises on Sunday evening. The incident sparked sharp reaction among the people of the State who consider Bana Vidaylay as the laboratory of Panchasakha enacted educational revolution in pre-independence Odisha.

Reports say some locals from the Sakhigoapal area spotted the missing head of the statue of Acharya Harihar located inside the Bana Vidyalay and immediately reported the matter to local police yesterday evening. The miscreants succeeded in mutilating the statue despite all measures taken by the administration after some unidentified men broke the statue partially on January 31 this year.

Notably, on January 30, some miscreants had stolen the statue of Pandit Godabarish Mishra from the same school premises and made a failed attempt to take away Acharya Harihar’s statue with them. Some local groups had held rallies in the area at the time to press the government to make necessary arrangements to protect this ‘nature school’.

Divyang singer fighting for life at KIMS to get artificial limbs