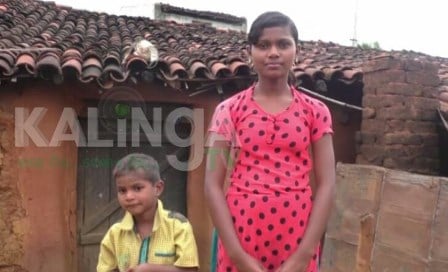 Titlagarh: 12-year-old Kajal Sahu is very keen to go to school for studies and has a dream to do something great in life, but fortune has forced her to live with the dream and never to fulfill it.

At a tender age, Kajal lives with a heart filled with despondency and a mind wieghed down by the struggle for the survival of her brother and her own as her parents are no more. She left studies in class 8th to become a parent to her five-year-old brother.

Whenever she gets something, she feeds her brother instead of having it herself and without a second thought. Sometimes, she has to sleep with an empty stomach to feed her dear brother.

The two poverty and misfortune struck brother and sister live at Desil village, just three kilometers away from Titlagarh town in Balangir district.

The hut they live in is also a threat to their lives as it is a small muddy house in very bad condition which may collapse any time owning to heavy rains.

While poverty has become a major problem for them, the anxiety to find food compounds the misery. They survive with whatever little they get from the villagers and have to sometimes go hungry when they do not get anything.

“My father had gone to Mumbai in search of work. But unfortunately he returned with the deadly disease HIV/AIDS and died five years ago. My mother used to work as a labourer and look after us. But she too passed away last year leaving us orphans. Now we live with the food which others give us out of mercy,” said a sobbing Kajal.

“Since our house is also in very bad condition, we fear that it may cave in anytime over us. We are frightened to sleep there,” the minor added.

The locals have urged the district administration to come to their rescue and look after them.

“After witnessing the difficulties of an orphan, Kajal has now left her studies, though she wants to continue, just to look after her brother. Forget about getting something to wear, they even do not get food to eat thrice a day. They live with whatever the villagers give them. The district administration should take care of them and help them to study, so that they can do something in life. If not, how will they survive?” said Lalit Sahu, a villager.

With inputs from Sanat Kumar Padhi

Rayagada flood affected to get cooked food for 7 days