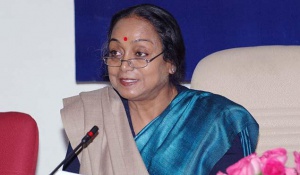 Kumar, a five-time Member of Parliament, is the daughter of former Deputy Prime Minister and prominent Dalit leader Jagjivan Ram. She was elected unopposed as the first woman Speaker of Lok Sabha and served from 2009 to 2014.

On the other hand, NDA nominee Ram Nath Kovind is set to file his nomination papers at 11.30 AM on Friday.