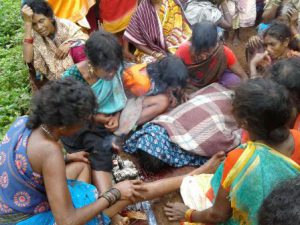 Koraput: Maoist violence struck Hatibari village of Nandapur block in Koraput district on Monday night with a group of Red rebels killing a Sarpanch by slitting his throat on suspicion of him being a police informer as well as indulging in corruption. The Maoists also torched several vehicles parked at the Sarpanch’s house.

The victim has been identified as Jagannath Khara, Sarpanch of Hatibari panchayat.

Reports say a group 20 to 30 Maoists with a couple of uniformed ones barged into Khara’s house between 9 to 10 PM and forcibly took him away to the nearby forest with them. Branding Khara as an anti-people leader, the attackers torched a bike, a car and a jeep kept at his residence in the village while leaving the spot. Khara’s dead body was found from the nearby forest with his throat slit this morning.

In a poster the Maoists have put up near the killed Sarpanch’s house signed by the Koraput-Srikakulam Division of CPI (Maoist), the rebels have accused him of swindling away government funds under Indira Awas Yojana (IAY), BPL rice and old age pension under political patronage. The Maoists have also protested the Sarpach’s initiative of holding a public relation camp at the Ashramput area in the district in May this year.

Police have reached the spot and seized the torched vehicle along with Maoist letters.