Maoists seek ‘development’, that too in Malkangiri! 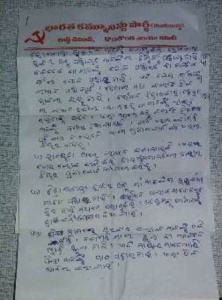 Malkangiri: Though it may sound strange, it is a fact that Maoists have now sought ‘ development’ in the cut-off area of Chitrakonda in the district, one of their common hideout.

In a letter to newsmen, Korkunda Area Committee of the outlawed group demanded the implementation of developmental projects saying that they have never obstructed real development work. But the state government has always blamed them for its neglect of development in the area.

The red rebels urged the electricity department to provide electricity to each village of Chitrakonda block, or else to face dire consequences in the people’s court.

The Maoists also said that while people in the area are suffering from different diseases, health workers are not visiting the areas.

There are no schools and Anganwadi centres in many villages. Besides, the teachers of schools are highly irregular. They have asked the teachers to be in the village and teach the students regularly.

Moreover, the Maoists have demanded that the state government also should provide drinking water to the people and water for irrigation.