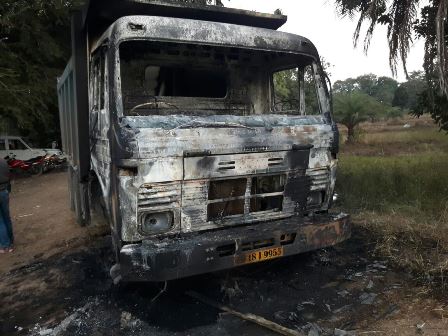 Malkangiri: Red fear loomed large in Malkangiri district again on Monday after a group of Maoists attacked a road construction camp at Bhairamgarh in neighbouring Bijapur district of Chhattisgarh State and torched a tipper.

A group of around 30-40 heavily armed Maoists with some of them in uniform attacked the road construction camp late in the night. After threatening the workers present at the camp they vandalized various construction equipment kept there. Later on issuing warnings against the construction work the ultras set a coarse aggregate laden tipper in the camp.

Maoists left the spot after ransacking the camp.

The outlawed CPI (Maoist) group has given a bandh call in Chhattisgarh today which has crippled the life in Maoist infested Dantewada, and Bijapur districts.

Notably, Maoists left people in Malkangiri in a state of panic on Sunday after they thrashed three villagers including an Ex-Sarpanch in Panasput village under Chitrakonda cut-off area in a Kangaroo Court.