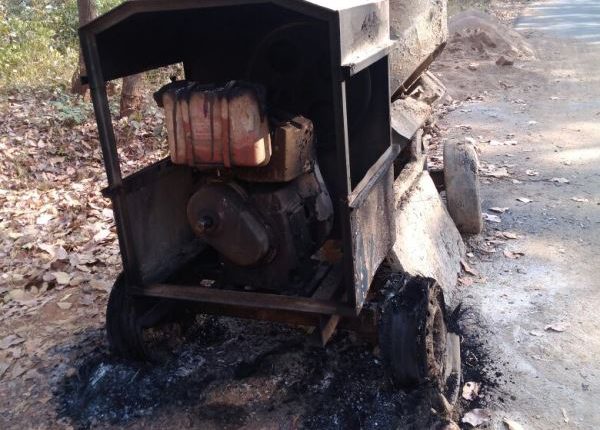 Bhawanipatna: Red terror showed its ugly face yet again in Kalahandi district with a group of armed Maoists vandalising a construction camp and torching a number of vehicles kept there in Lanjigarh area under Narla Police Station last night.

The incident took place in the wee hours while Kadamguda-Bhurtigarh Road construction work was underway and labourers were resting in a polythene camp set up beside Lanjigarh Road. At least 15-20 heavily armed Maoists raided the camp and started threatening the workers at gunpoint. They later torched several tipper machines and other vehicle kept at the camp.

Shouting slogans against the road construction project which was being carried out under the Pradhan Mantri Gram Sadak Yojana (PMGSY), the red rebels also attacked a water tank located near the site and damaged it, before leaving the spot.

Narla Police reached the spot and took stock of the situation this morning.

Details are awaited in the incident.