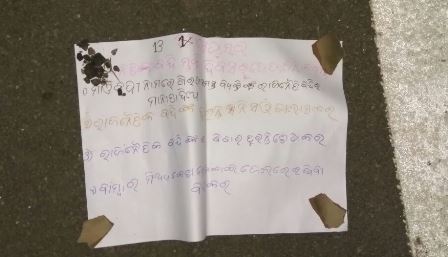 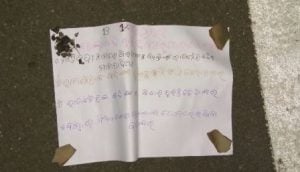 Bhawanipatna: Maoist posters have surfaced in Kalahandi district on Tuesday morning for the second time within the last four days. As many as five posters were found pasted at several places under Sirliguda area in Thuamul Rampur block of the district.

The posters were spotted by locals across five villages in the block this morning. Police seized the posters later in the day after getting information about them from the locals.

The posters released in the name of the banned organisation CPI (Maoist) demanded unconditional release of jailed cadres and comdemned the alleged police brutalities on the innocent comrades. Through the posters, Maoists also demanded political prisoner status for the jailed Red rebels and demanded that government should take immediate steps in this regard.

The red-posters alsi appealed to the people across the district to observe September 13 as “Mukti Diwas” and warned the government against implicating the arrested Red rebels in false cases.

Notably, Maoist posters were also seen in Trilochanpur area of Lanjigarh block in the district on Friday.