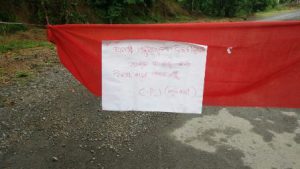 The fresh poster tied to a tree put up near the Chandahandi hill road came to fore after some locals spotted it along the Chandahandi-Jharigaon road early this morning. They immediately brought the matter to the attention of the local police.

Suspected to have been put up by Maoists, the posters categorically cautioned locals against celebrating Independence Day and appealed to them to observe it as Black Day. However, police doubted the authenticity of the poster and said an investigation would be conducted to find out whether it was really handiwork of Maoists or had been put up by some local miscreants to spread panic.

Vehicles on both sides of the road remained stranded for quite some time due to the incident. Normal traffic was restored on the route only after police removed the posters.