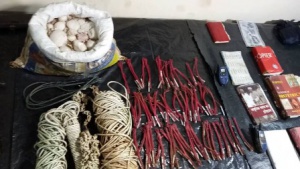 Rourkela: Security forces busted a Maoist camp in Mahulpada forest near Rourkela in Sundargarh district and seized a huge cache of arms and explosives on Friday.

Acting on a tip off, DVF and CRPF personnel conducted a joint operation in the forest and seized the firearms.

Search operation has been intensified in the area following the seizures of arms and explosives.