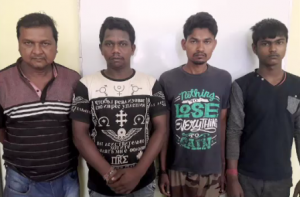 Keonjhar: Exposing the rampant smuggling of minerals in Raida forest area of the district, police seized a manganese ore-laden truck at Talakhanting area near Joda on Saturday and arrested four persons from the spot.

The arrested have been identified as Rudradev Mohanta, Bikram Purty, and Sinil Munda of Talakhanting area in Joda and Prasanjit Pal of Dhanbad area in neighbouring Jharkhand state.

Getting a tip-off on the mineral smuggling, a team of Rugudi Police conducted a raid in Talakhanting area and seized a truck laden with manganese ore. Police also arrested the driver and helper of the truck along with two bikers who were escorting them. Two mobile sets were also recovered from their possession.

Police said the seized manganese which weighs around 20 tonne would worth around Rs 2 lakh. The mineral was being transported to Jharkhand, they said.

The arrested accused have a number of cases pending against them at Joda and Barbil police stations, police informed.