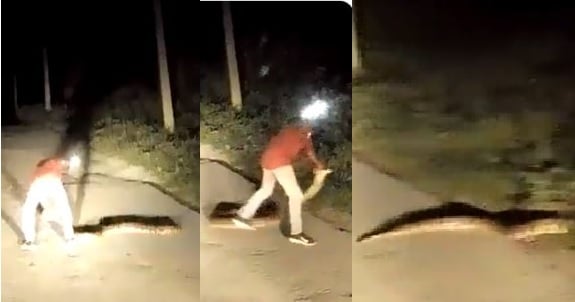 The IFS officer posted the video and wrote in the caption, “Your views on it. Going in wildlife habitat & disturbing or saving it from road accident. Video is from important wildlife habitual in south India.”

We can see in the video that a man is fearlessly moving towards a giant snake without paying heed to the cautions made by others on a road at night. The man reaches near the large snake, that seems like a python, and picks it by its tale and moves it out of the road. Once he touches the reptile, it offers a hostile reaction, but soon perhaps it gets convinced that the human is not trying to haram it anyway, rather he is trying to move it away from the road to save it from getting crushed under the wheels of vehicles and thus calmly moves out of the road.

The video has earned a good number of comments where people mostly have praised the daredevil act of the man to save the huge snake from getting crushed by vehicles.

Snake gets stuck inside speedometer of bike: Watch viral…

A user wrote, “Looks like he was saving it from being run over.” Another user also comments, “Saving from road accident.”

Your views on it. Going in wildlife habitat & disturbing or saving it from road accident. Video is from important wildlife habitual in south India. @BoskyKhanna pic.twitter.com/7W110lg3CD