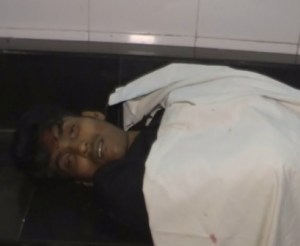 Bhanjanagar: A youth was killed after the bike he was riding on smacked into a roadside guard wall in Kaindi village under Bhanjanagar police limits in Ganjam district today.

The deceased has been identified as Ratnakar Behera of Sahaspur village under Aska police limits.

The mishap took place early in the morning today while Ratnakar was returning home after attending a marriage, which was held in the Jilundi village near Bhanjanagar last night. It is suspected that the victim lost control over the bike on Kandi Road due to some reason causing the bike to hit a roadside guard wall. He sustained critical head injury on the spot and turned unconscious.

Ratnakar was spotted by some passerby later in the morning and was rushed to the Bhanjanagar Community Health Centre (CHC), where doctors declared him brought dead.

Bhanjanagar Police have reached the spot and seized the mangled bike.