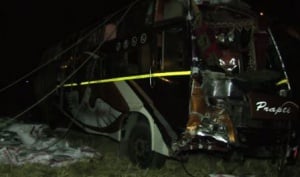 Sambalpur: A man was killed while 20 others were injured when the bus they were traveling by overturned on NH 55 near Naxapali in Sambalpur district late on Saturday night.

Pramod Baral of Stationpada area in Bargarh district was killed on the spot and 20 others were injured when the private bus named Jagadguru overturned after hitting another bus.

The driver of the bus, which was on its way to Bhubaneswar from Bargarh, halted the bus for some hours on the way after getting information of road blockade on the route due to a bus accident. Later, he drove the bus fast to make up for lost time. However, he lost control over the wheels of the ill-fated bus while over-speeding and dashed a bus parked on the road side. The bus turned turtle under the impact.

Rescue operations were first carried out by the locals, who rushed to the spot after being alerted by the passengers. Later, police arrived at the accident site and started investigation into the accident.

Initially, all the injured were rushed to the Sambalpur district headquarters hospital. Later, one of them was shifted to Veer Surendra Sai Institute of Medical Sciences and Research in Burla as his condition worsened.