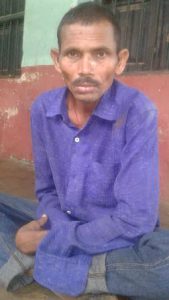 Bolangir: In an incident suspected to be the fallout of family feud, a man hacked his wife to death in Barapudugia village under Sadar Police limits in the district early on Wednesday morning.

The deceased has been identified as Gouri Nayak of Barapugudia village.

Reports say a heated argument erupted between the accused husband Ganesh Nayak and wife Gouri over some petty issue early this morning while the two daughters of the couple were out of the home. Following the verbal duel, Ganesh took out an axe and hacked her wife  in a fit of rage killing her on the spot.

Sadar Police reached the spot immediately and sent the body for autopsy. Later on it took Ganesh into custody.

Briefing on the incident, Sadar Police IIC Ananda Majhi said police got information on the incident at around 7 o’clock in the morning and arrested the accused after reaching the spot. While the investigation is on, police suspects it to be an incident of family feud as the couple had a history of marital discord and a case has been pending at the Sadar Police Station in this connection, he added.