Man hacks aunt to death on suspicion of witchcraft, surrenders 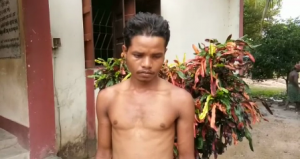 Udala: In yet another superstition-related crime, a man hacked his aunt to death suspecting her to be practicing sorcery before dumping her body on the banks of a river in Thakursahi village under Kaptipada police limits in Mayurbhanj district on Sunday.

The incident came to the fore this morning after the accused surrendered before Kaptipada police with the weapon used in the crime.

The deceased has been identified as Gumei Murmu of Thakursahi village.

The accused Shiva Murmu of Thakursahi village had started suspecting his aunt Gumei of practising witchcraft after her husband Mana Murmu died of an unknown illness some 10 days ago. In his confessional statement to Kaptipada police, Shiva Murmur said Mana had informed him before his death that Gumei had predicted his death with ease. As Mana died exactly on the day Gumei had predicted, the accused’s suspicion grew stronger.

Shiva killed his aunt in a pre-planned manner on Sunday evening when the later was returning from the weekly haat. Shiva first pushed Gumei down a river embankment and then attacked her with a billhook. He dumped the body over there and left for his home.

Police has taken the accused into custody and his interrogation is on.