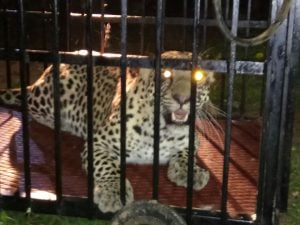 Nuapada: A leopard which had caused panic among the people of Haladi village under Khariar Forest Range in Nuapada district for the last two months was caught in a trap on Saturday night.

In order to catch the man-eating leopard, forest department officials had laid a trap at a forest close to the village with the help of local people.

The leopard had killed a 4-year-old child while he was asleep with his parents on the verandah of their house in the village on May 26.

On July 9, the leopard had attacked a 55-year-old man and his 10-year old granddaughter Chandini while they were asleep in their house.

Minor among 3 swept away in Rayagada flood; 7000 marooned