Man carries sister-in-law’s body on bicycle in Odisha, Here is why 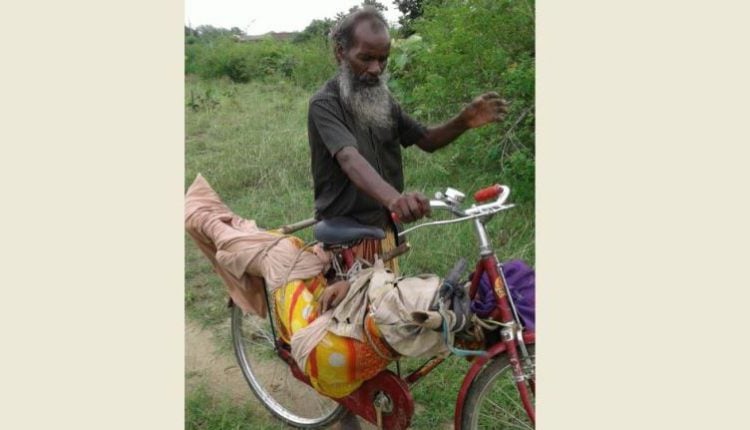 Boudh: In a shocking incident, a man carried his sister-in-law’s body on a bicycle to the crematorium after villagers allegedly refused to help him on Tuesday. The incident took place at Krushnapali village under Brahmanpali Panchayat of the district.

According to reports, one Pancha Mahakud was admitted to the District Headquarters Hospital (DDH) after she suffered from diarrhea and vomiting, couple of days ago. However, she died yesterday while undergoing treatment in the hospital. Later, a mahaprayana vehicle carried her body to the village. Mahakud’s brother-in-law Chaturbhuja Banka sought the help of the villagers to shoulder her body to the crematorium and perform the last rites. However, none of them turned out as Mahakud’s family members were ostracized from the village.

The kin of the deceased woman were allegedly boycotted from the village as her uncle Kapila Banka had not offered a banquet for them during his second marriage around 15 years ago after the death of his first wife.

Finding no means of help from the locals, Chaturbhuja carried the mortal remains of his sister-in-law on a bicycle to the crematorium and performed the last rites.

Meanwhile, the incident has been vehemently condemned by people of different walks of lives after photos and videos of the ostracised man carrying the body went viral.

5 Vegetables That Will Help You Overcome Protein Deficiency