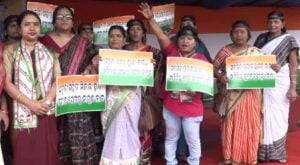 Bhubaneswar: Protesting the Central Government’s decision to withdraw subsidy on LPG in a phased manner, Odisha Mahila Congress staged a demonstration in front of Raj Bhavan here on Saturday.

“We strongly condemn the decision of the Union Government to hike the price of LPG by Rs 4 every month.  They got the votes of women by giving them false promise during the election.  They are claiming to have provided gas to two crore women across country under the UJALA Scheme and boasting about having given prestige to the women. But, now they have decided to increase the price of LPG by Rs 4 for each cylinder every month. The countrymen are not fools. We warn them not to go ahead with the decision or else we will intensify our protest,” said Sasmita Behera.

The protesters also submitted a memorandum to Governor Dr SC Jamir in this regard after the demonstration.