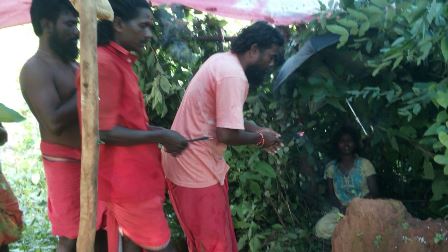 Nabarangpur: Dhanasuli villagers under Papadahandi police limits in Nabarangpur district have been worshiping a 20-year-old girl as a deity for the last five days after she displayed some unusual behaviour.

A huge number of people from Dhanasuli and nearby villages recently gathered on the spot, where they found the girl sitting near a termite mound and saying some sorts of prayer and started worshiping her.

According to reports, one Jagat Mali’s daughter Dalimba Mali had gone to collect mushroom from a nearby forest five days ago. She developed some unusual behaviuor and kept sitting quiet after returning from the forest.

Surprised with her behaviuoral change, her parents asked her the reason. In her reply, she reportedly said, “Goddess Parbati gave me darshan. I will not stay at home anymore. I will go to her.” Dalimba’s worried family members went to Jhitukuguda village to call a sorcerer.

However, by the time her parents returned home, the young woman had left for the dense forest. Her parents, after searching for her all day, found her sitting near a termite mound and praying to god the following day. Noticing her in such a condition, they informed the villagers, who rushed to the forest and began worshiping her as a deity.

Some of the villagers have also started guarding her near the termite ground setting up a make-shift camp in the forest.