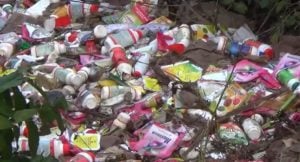 Rayagada: A large amount of unused pesticides were found at the outskirts of Dumaguda and Adpatguda villages near Nagavali river bank in the district on Wednesday.

The local people noticed several thousands of pesticide bottles and packets, with expired and non-expired tag dumped near the two villages, around five km away from the district headquarter, this morning.

These pesticides are being used on paddy, cotton and other crops, claimed a local farmer.

“All these pesticides seem to be fake or substandard as large number of products have expired date till May 2018. Some local businessmen might have dumped the pesticides fearing government raids on their shops or godowns,” said a villager with a condition of anonymity.

The villagers also stated that the Nagavali river has been the lifeline of the region as most of the local villagers and animals use the river water for various purposes. However, these pesticides will pollute the river water in the lower catchment area, creating a state of panic among the local people.

Speaking to media persons, Deputy Director of Agriculture, Rayagada, Rabindranath Khuntia said that their department has not supplied any pesticides to any farmers or distributers in this region during the current kharif season.

Later on the day, a six member team of agricultural officials led by Khuntia visited the spot to inspect the dumped pesticides.

Last week, the State Government had banned products of at least 11 pesticide companies on charges of selling fake pesticides in the market across the state.

Significantly, some farmers in this region had recently set their crops on fire after failing to address the massive pest attack on their paddy crops.