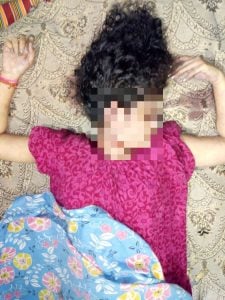 Bhubaneswar: Panic gripped Kanan Vihar Phase II area here today morning after body of a lady pharmacist was found from her rented house under suspicious circumstances. The victim was found lying on the floor of her living room with throat slit.

The deceased has been identified as Haseena Dash from Erasama area in Jagatsinghpur district and was working as a pharmacist in a private run hospital in the capital city.

The incident came to fore after some neighbours of Haseena witnessed the doors of her room remained closed for long time this morning. As she did not open the door despite repeated knocking, the neighbours called up his uncle and reported the matter.

Haseena was found dead inside the room after her uncle reached the spot and broke open the door. Getting intimation from the locals on the incident Infocity Police reached the spot later in the day and sent the body to the Capital Hospital for autopsy.

While police is still clueless in the death of Haseena, her uncle claimed it to be a case of murder perpetrated by three to four persons. He said, Haseena could have been killed by some close friends having an access to his rented house. Pointing at the injury marks on the deceased’s throat he claimed his niece has been killed with a sharp object.

Police said, scientific team has reached the spot and everything would come clear after a proper investigation.