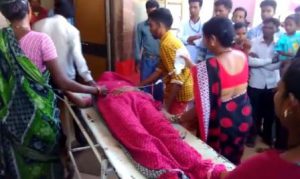 Koraput : The Kunduli gang rape survivor was produced before the JMFC court here, hours after being discharged from Koraput Hospital today.

The minor girl was taken to the court under tight security to record her statement under Section 164 of CrPC. She was accompanied by officials of district Human Rights Protection Cell (HRPC) and Koraput Police.

Earlier in the day the medical authorities had duly communicated the district administration and the HRPC on the discharge of the survivor.

The minor had been gang raped by four men allegedly dressed as jawans of central forces while returning from the Kunduli daily market on October 10. Since then she remained admitted in the Koraput Hospital.

Significantly, the police are still empty handed in the case barring detaining and questioning only 4 relatives of the victim even after 17 days of the the incident.