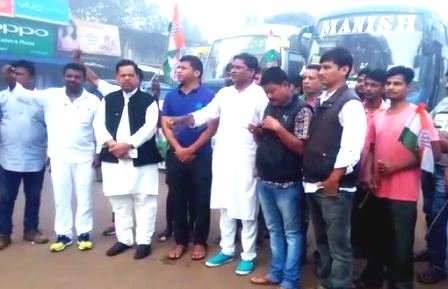 The bandh which coincided with the Maoist bandh would conclude at 1PM.

“The district congress called the bandh to press their demand to provide justice to the gang rape survivor and arrest the accused”, said Koraput MLA Krushna Sagaria.

All the educational institutions and business establishments were shut due to the bandh. Hundreds of vehicles also remained off road as the party workers staged road picketing at different places of the district.

The district Congress unit has also threatened to go on an indefinite period of agitation if the government fails to take action promptly.

The strike has been supported by all the congress units of undivided Koraput district including Nabarangpur, Malkangiri, Rayagada and Koraput.

The district police has made elaborate security arrangements to avoid any untoward incident during the bandh.

On the other hand, the accused are still at large even six days after the heinous incident. A five-member team under the leadership of a Crime Branch SP is probing the crime.

A class IX class student of Sorisapadar village under Potangi police limits in Koraput district was allegedly gang raped by four security personnel while returning from the Kunduli Haat (market) on Tuesday. The incident had sparked off public outcry. She is now undergoing treatment at Sahid Laxman Nayak Medical College and Hospital in Koraput.